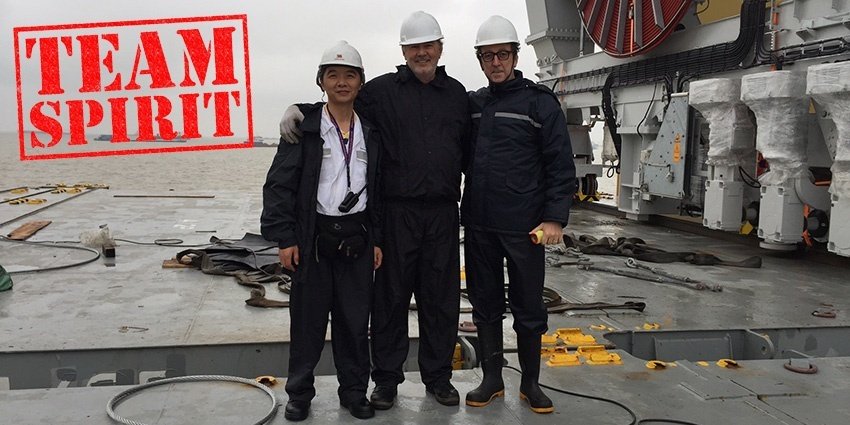 Members of the AAL Operations Team taking a well-earned moment to reflect, having just coordinated the safe & successful loading and stowing of 4 giant ASC units onto the AAL Hong Kong, in some appalling Shanghai weather and visibility conditions. 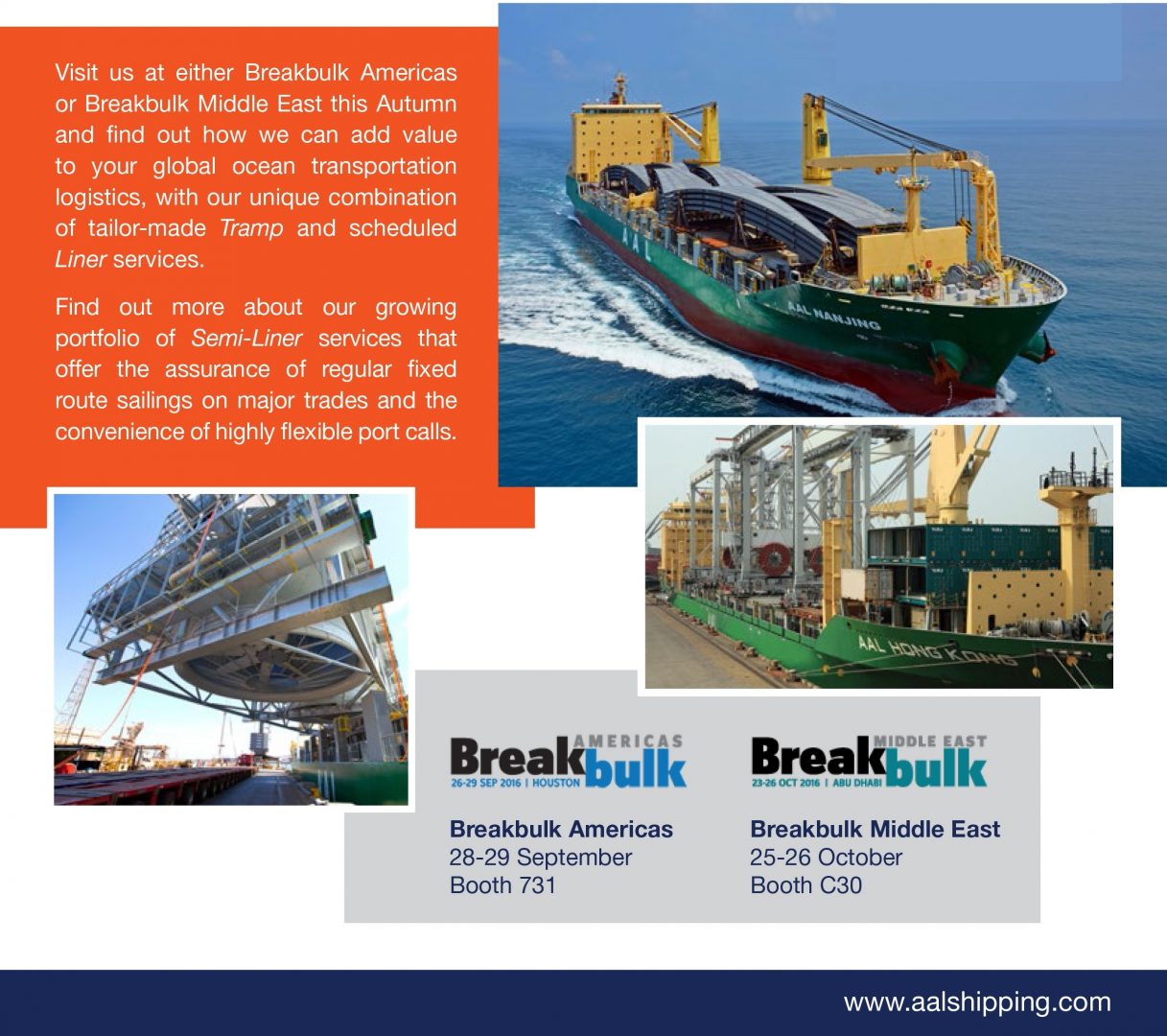 AAL Singapore turned out in full force, to celebrate a particularly busy time of new developments and exciting activity within AAL. The team were invited by the management to replace their work-wear with some casual gear and compete in an intra-office bowling competition on a Friday afternoon at the end of May. The event proved highly successful and provided a great opportunity for everyone to simply ‘let off steam’. With ice-cold beer flowing and everyone encouraged to mingle, the event proved less about bowling and more about getting together to socialise – and quite right too!

This short video shows how AAL engineered part of a series of shipments of 20 Automated Stacking Cranes ‘ASC’ – 473 sqm each unit – on multiple sailings from Shanghai to Melbourne, for final delivery to Victoria International Container Terminal. The combination of our Tramp & Liner Divisions working together deliver a seamless and cost-efficient solution. The cargo is transported along AAL’s scheduled Asia – East Coast Australia liner service, which offers 13 regular port calls on a 17-day rotation. Our 31,000dwt A-Class vessel ‘AAL Hong Kong’ was chosen for the task, as it provided 1,800 sqm of clear deck space and enabled 4 of these giant ASC units to be loaded and transported on a single sailing – the first time this has ever been done.

4 In-house AAL engineers worked in tandem in Asia & Australia to plan and oversee every stage of operations. Loading and discharge of the ASC units required simultaneous operation of three on-board cranes. The professionalism and flexibility of AAL’s operational and engineering teams enabled changes up the last minute. Acting as both ship owner and operator, AAL quickly signed-off major ship modifications needed to accommodate this huge cargo. The third shipment (featured in the video) was successfully loaded in Shanghai, during extremely poor weather and visibility conditions. 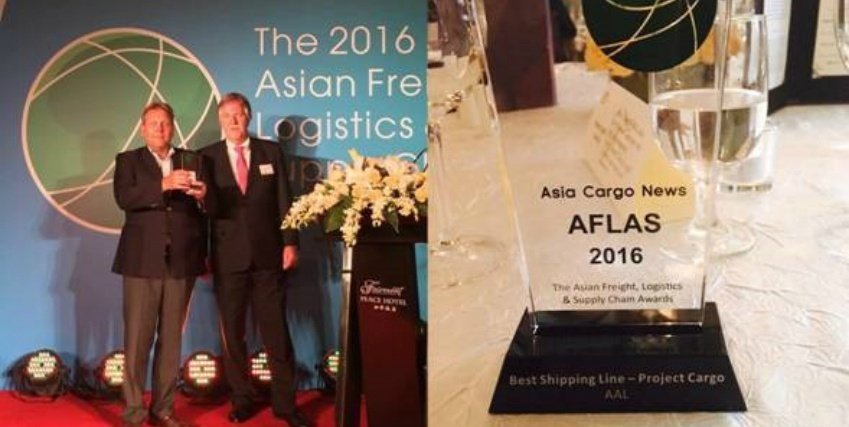 We announce with great pleasure that yesterday evening, at a packed ceremony at the Fairmont Peace Hotel in Shanghai, AAL won the Asia Freight & Supply Chain (AFLAS) 2016 Award for ‘Best Shipping Line – Project Cargo’! This is a record third consecutive time that AAL has won this award.

Beating out other shortlisted carriers, that included Intermarine and Wallenius Whilhelmsen, the award was presented to our Deputy Managing Director, Wolfgang Harms. He attended the event on AAL’s behalf with the General Manager of our China Office, Zhao Jin Hai.

Our Managing Director, Kyriacos Panayides said of this lates achievement,‘It was extremely hard to make it onto the nominated shortlist for this award back in 2014, when we first won it. It was then twice as hard to hold onto the award for a second year. But, to be nominated for a third consecutive year and to win again is an incredible achievement. We thank our peers within the global shipping industry who voted for us and for their continued support and faith.

‘This achievement is dedicated to all our AAL personnel who – despite the pressure from the recessive global markets – keep delivering a superior service at every level of our organisation and constantly strive to deliver to our customer first-class global transport solutions.

He concluded, ‘This award also reflects the unique expertise and invaluable contribution of CSM and our fleet’s talented officers and crew, who ensure safe and efficient sailings and cargo operations for AAL across the globe, 24/7.’

Not everything is about work and AAL is pleased to announce another evening with BPLG Members. If you had the pleasure of joining the previous event at Eleven Bar in April, you might remember that there was a donations desk at entry for the Zig Zag foundation to help kids in need.

We have secured the elegant Brass Bar at the Pig & Whistle in Brunswick St, Fortitude Valley for this month’s frivolities. The evening will kick off at 5pm on Friday the 17th June – Happy Hour. Please take the time to catch up with the BPLG Members and our AAL team.

This is another chance for all of you to join this exciting social event in which all project related professionals can relax and meet others in the industry without any hard selling taking place, and of course participate with a ‘note’ donation given at the entrance desk together with their business card.

AAL looks forward to see you!

AAL Japan’s one-year anniversary celebrations in Tokyo provided an opportunity for the country’s leading shipping industry stakeholders to come together and share cautious optimism about the industry’s economic outlook and predictions that heavy lift breakbulk cargo movement ex Japan into Asia will grow over the next 18 months.

AAL’s anniversary celebrations at Meijikinenkan were attended by almost 200 guests and hosted by its Chairman, Heinrich Schoeller, alongside Managing Director, Kyriacos Panayides and other senior representatives of the multipurpose operator from around the world. Helping the mood of optimism about Japan’s project cargo exports was news that local engineering companies are involved with energy projects coming online in Taiwan, Vietnam, Thailand, Indonesia, Malaysia and Myanmar, as well as oil and gas developments in Indonesia, Vietnam and Thailand. Beyond Asia too, upcoming energy projects are being targeted in Africa and oil & gas projects on the US West Coast and Middle East are raising confidence and drawing focus away from a slowing China trade.

Wolfgang Harms, Deputy Managing Director of AAL and head of its operations in Japan commented, ‘Japan’s position as the world’s third largest economy is very much by design. The engineering, industrial and commercial infrastructure and capabilities here are a leading example to the rest of the Asia and indeed many other markets around the world.

‘The local government is working hard to lift economic fortunes. This is being shaped not just with monetary policy to boost trade & consumer spending to an inflation target of 2%, but through infrastructure developments, renewable energy reforms and the building of stronger trade outside Asia – a policy which helped exports rise in the last quarter of 2015, after a sustained period of decline.’

‘Part of the traditional and close local shipping community for many years – even before we opened the Tokyo office – AAL has understood that quality, transparency and reliability are absolute conditions to successful shipping operations here and, in delivering upon these, we’ve established and maintained a leading position in our sector. We will continue to work alongside the rest of the Japanese shipping community to support and even build upon these green shoots of growth in the market.’ 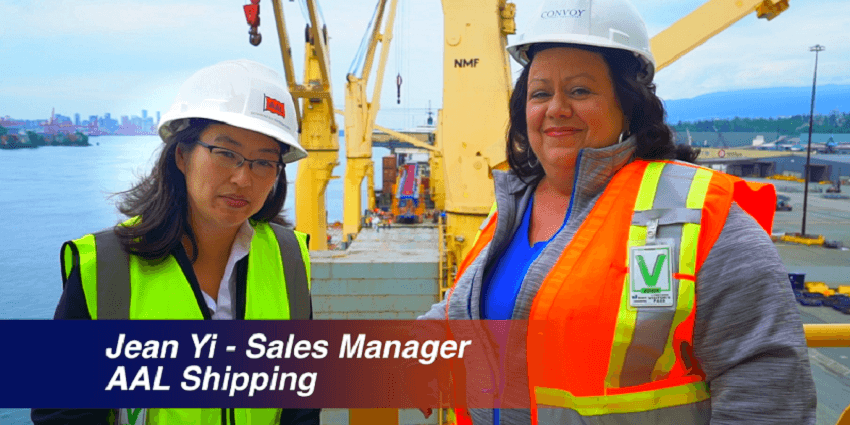 Jean Yi, Sales Manager in AAL Canada
Interviewed about the cargo discharge, May 2016.