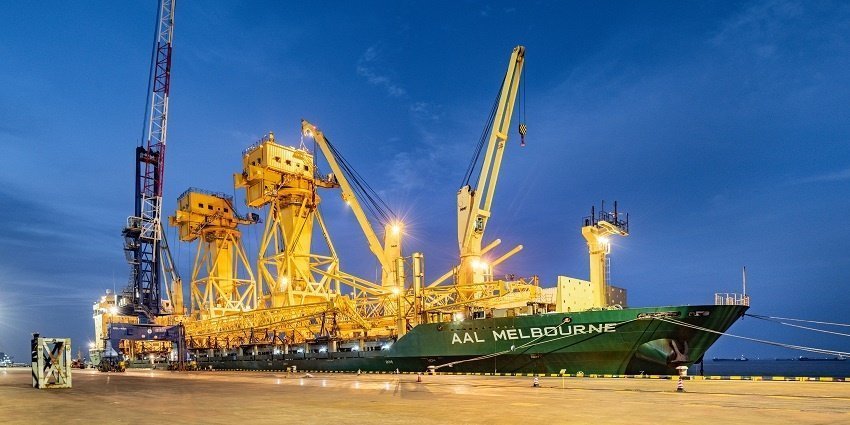 The AAL Melbourne recently loaded two cranes and their components weighing just over 1,800 mt in total in Taicang, for onward transport to Jebel Ali. The 42m high main modules towered over the 31,000 dwt mega-size vessel and, lit up in the evening, took-on an imposing resemblance to two Martian tripods from H.G. Wells ‘War of the Worlds’.

Manufactured in China by global supplier of heavy lifting and handling equipment, Nantong Rainbow Heavy Machineries Co. ltd., the two ‘jib cranes’ were loaded by the mega-size A-Class HL MPV, the AAL Melbourne in Taicang. They were then discharged in Jebel Ali, for deployment at the DP World’s Shipyard in Dubai – the largest facility of its kind in the Middle East, which handles an approximate 350 vessels a year, mostly ultra and very large crude carriers.

Jack Zhou, General Manager of AAL China – the office responsible for booking the cargo – said, ‘The crane components comprised just under 20 big units, the largest of which weighed over 550mt and measuring 115m long. Some we loaded from the wharf and others from a floating barge. They were stowed both in under-deck holds and on the weather deck. Added to this, we received unexpected last minute instructions and changes from the charterer, but were able to safely complete loading to an extremely tight and unmovable loading deadline.’

Nicola Pacifico, Head of AAL Transport Engineering – the function responsible for planning the loading, stowage and discharge operations – explained, ‘Even with a vessel providing 40,000cbm stowage capacity, space was extremely tight on this project. The two main structures had to be secured on specially laid rails. One of these came to within 20 cm of our own ship’s crane. This is very close, as decks are rarely even and such tolerances are unusual. If at any point we thought they might touch we would have had to discharge the structure, move the rails and reload again.’

He added, ‘This is the type of situation where engineering precision and accuracy resonate most. Had we not planned so carefully for the potential risks involved and matched these perfectly against the capabilities of the vessel and skill of the crew, the safety and timing of the entire operation could have been compromised and when you’re dealing with extremely large, heavy and highly valuable project cargo, there is no room for error.’

We have offices worldwide in Australia, China, Japan, South Korea, Europe and the Americas. Find out more