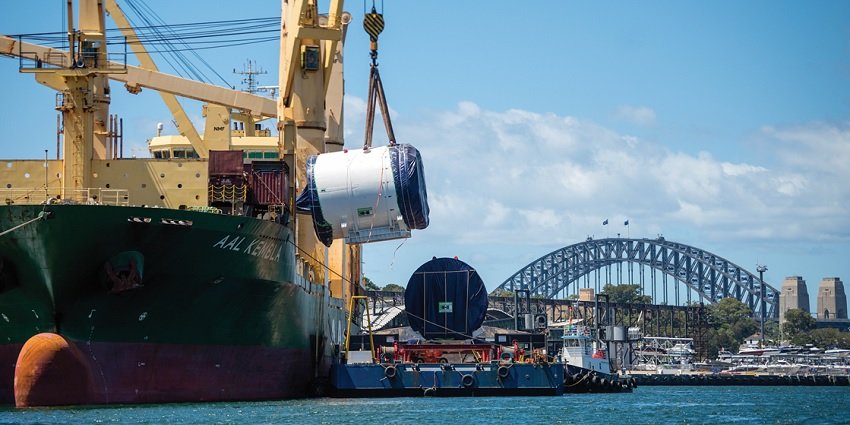 In February, AAL successfully completed a major shipment of two mega tunnel boring machines (TBMs) from Nansha in South China to Sydney and Melbourne respectively, equipment that will help progress important new multi-billion-dollar metro railway projects taking place separately in the two state capitals. The two units and their components totaled over 7,445cbm and 2,000mt in weight and were shipped aboard the 31,000dwt heavy-lift MPV, the AAL Kembla, on behalf of Geodis Hamburg.

The two TBMs were manufactured by world-leader in heavy tunnel boring machines, Herrenknecht AG and this is the sixth shipment of such units that AAL has been commissioned to operate in the past eight months on the manufacturer’s behalf, via its selected logistics partner, Geodis Hamburg – all cargo destined for Australian infrastructure projects. The Larger of the two units on this shipment (weighing almost 1,000mt) is part of a 130-metre long boring machine named TBM Kathleen. She is the last of five mega borers for the Sydney Metro City & Southwest Project and will help to build twin 15.5km railway tunnels deep under Sydney Harbour – eventually enabling underground transport of passengers in state-of-the-art driverless trains.

Marco Wendt, European Chartering Manager commented, ‘Each of our six shipments of these enormous TBM units over the past eight months has provided unique challenges, which we addressed and overcame every time. On this occasion we had tight delivery deadlines. A four-day window to discharge the first unit in White Bay, Sydney – which we did directly to barge – and then to deliver the second unit to Melbourne by 28 February, which we also accomplished.’

He added, ‘Every day is a huge expense on such major infrastructure projects and Geodis know that AAL will pull out all stops to deliver on time and that we have the commitment, engineering and operations know-how to find solutions even under the most challenging circumstances. That trust between forwarder and carrier is extremely important and explains the long-term relationship we enjoy and the future projects already in the pipeline over the next few months.’