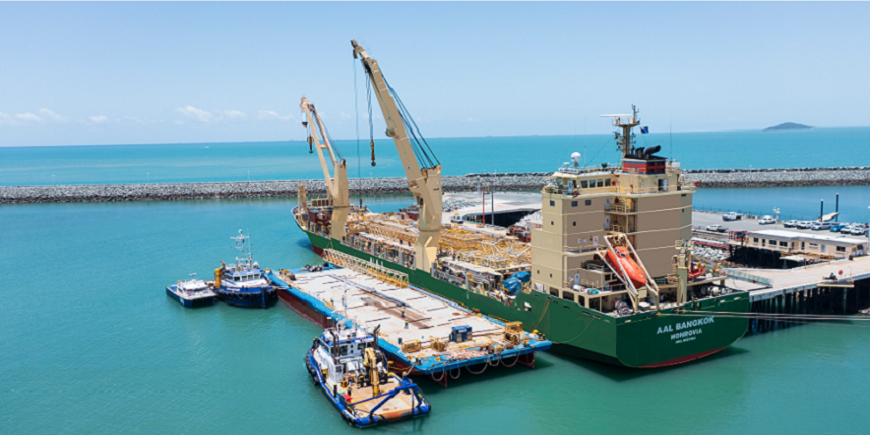 The brownfields project involves the disassembly and replacement of one of the existing berth and shiploaders to improve cyclonic wave immunity to terminal operations. The site is located within the lease boundaries of the Hay Point Coal Terminal, approximately 38 kilometres south of Mackay, Central Queensland.

Shipment one carried heavy lift components from China to Mackay, to facilitate the on-site installation of new berth modules. The cargo comprised of temporary steelworks including walkways, platforms, huts and piles – the latter between 2m and 53m in length. Shipments two, four & five from China transported components in support of preparatory works including modification of existing concrete caisson berth foundations, disassembly and removal of the existing berth and ship loader and on-site installation, tie-in and commissioning of new berth modules. Shipment three, from China to Henderson on the Australian West Coast, comprised 86 frames and walkways and enabled the off-site fabrication of new berth topside modules (decking, ship loader rail beams, conveyor galleries and sections) and the new Shiploader (SL2A).

Frank Mueller, General Manager of AAL Australia, explained, ‘We have worked extensively with Geodis Australia over the years, and they know the experience of our local team and the regularity and flexibility that our Asia to East and West Coast Australia Liner Services have delivered for 27 years. The Australian market has been experiencing significant terminal congestion issues, extended waiting times and increased port charges. The success of our operations involves the careful handling of these challenges – either mitigation of potential port congestion and detention charges, or schedule optimisation by remaining flexible and having the ability to add inducement ports, when required. This is why AAL has maintained its reputation and standing when other carriers have either reduced their local presence or pulled out of the trade altogether.’

Nicola Pacifico, Global Head of Engineering at AAL and speaking on behalf of the engineering team at AAL Shanghai who planned most of the shipments into Mackay added, ‘Cargo components were loaded in Shanghai from barge, truck and wharf – depending on their unit size – and carefully stacked and secured these on deck into tiers of three and four units high to ensure as much cargo as possible could be safely stowed on each sailing. Local COVID restrictions in China meant that our Cargo Superintendent could not physically attend loading, instead we monitored activity via live video feed and online comms with our Master and crew.  Before the Pandemic, remote supervision of such operations was rare. Today, it is a fact of life and all our teams have been extensively cross trained to execute work under these forced conditions.’