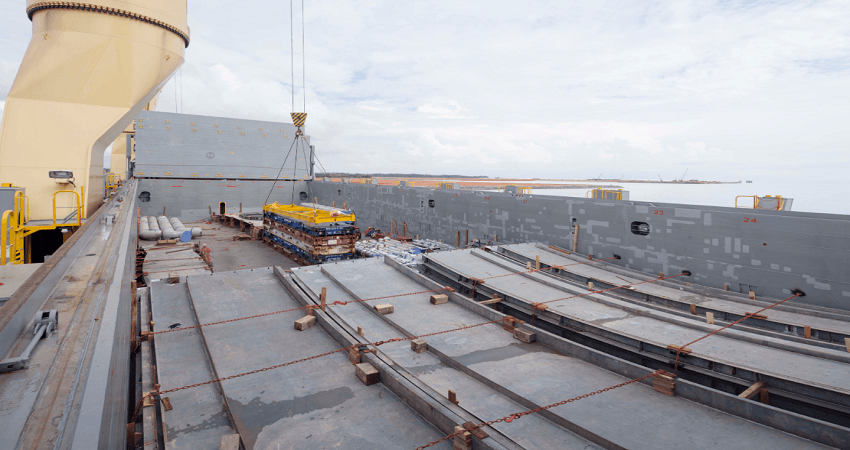 Hamburg welcomed the ‘AAL Kembla’ on her first call in Germany’s largest universal port. She berthed at C. Steinweg’s multi-purpose Süd-West-Terminal. AAL Shipping is deploying the heavy-lift/project cargo ship on its new monthly liner service connecting ports in Europe, the Middle East, India and Asia. The service is overseen by AAL’s Hamburg office, opened in 2012, which also offers tailormade tramp chartering shipping to all regions in the world.

Built in 2011, the ‘AAL Kembla’ is one of the carrier’s second-generation A-class multi-purpose, heavy-lift vessels. She is 193.81 metres long and 29.1 metres wide, with a draft of 9.2 metres. The vessel has four shipboard cranes and a maximum lift capacity of 700 tons. The deadweight tonnage of the ‘AAL Kembla’ is 31,000 dwt.

In the Port of Hamburg, dominated by container handling, heavy-lift shipments are a specialised field. Project/heavy-lift cargo is classified as ‘Conventional General Cargo’. This covers cargo that containers cannot transport on account of size and/or weight limitations, including large vehicles, machines, plant and out-of-gauge iron & steel products. During her first call in Hamburg at C. Steinweg’s Süd-West-Terminal, the ‘AAL Kembla’ loaded steel plate for discharge in Shanghai and chemical components for Masan in South Korea.

Hamburg is very well placed as a universal port, with its range of general and project cargo shipping companies. Generally connected trimodally, its terminals with their state-of-the-art handling equipment are the basis for its significance in the international general cargo transport chain. Handling, transport and warehousing of general cargo generate high added value: almost one-third of regular liner services in the Port of Hamburg transport non-containerised general cargo. In 2019 general & heavy-lift cargo ships and special vessels for wheeled – RoRo – or refrigerated cargo accounted for 17% of all calls in the port. General cargo handling totalled 1.4 million tons, 1.1 million tons being exports.